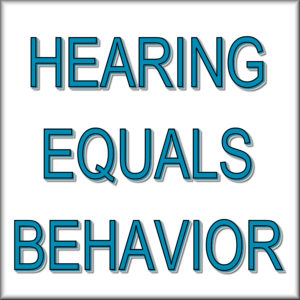 I still get goosebumps when I hear of the incredible progress some of our clients make as a result of completing the Berard AIT program. Of course, not everyone makes dramatic change, but sometimes even a small change can go a long way. For instance, I recently had a family call me months after their young, teen son had completed the program. They said how much this program had helped everyone in the family.

I asked the mother what she meant. She said, “We no longer have to feel like we’re walking around on our tiptoes anymore. He’s handling things so much better now, whereas before, he got overloaded and would blow up. We always had to watch out for anything that might upset him.”

What’s interesting is that if you look at this from a purely psychological viewpoint, you might be inclined to say this family has a dysfunctional dynamic. Allowing one member of the family, particularly a child, doesn’t seem like a healthy family dynamic. However, when one understands that the nature of the problem is a sensory based issue, it becomes more of a normal adaptation.

When his hearing was able to be normalized, he no longer became abnormally upset or disturbed by all the background sounds. He was able to handle situations much better than in the past when he would get angry and blow up because he was overwhelmed. Now, after completion of the Berard AIT program, that has changed. As a result of their son completing the Berard AIT program, the family is now capable of relaxing and a more normal atmosphere is flourishing within the family.

As I said before, not everyone see dramatic changes, but this one family proves how even the small changes can make a huge difference. Call us if you or someone you know believe your family could benefit from our program at 828-683-6900 or fill out our contact request form and we will call you.

PREVIOUS POST« A Brief Explanation of Auditory Processing Disorder as it Relates to AITFirst, Do No Harm – Primum Non Nocere NEXT POST»